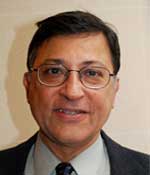 
"For broadening the public understanding of science in Pakistan and for informing the public of the dangers of the nuclear arms race in South Asia."


Pervez Amirali Hoodbhoy is chairman and professor at the department of physics at Quaid e Azam University, Islamabad, where he has taught for 36 years. He received a PhD in nuclear physics from MIT in 1978, and won the Abdus Salam Prize for Mathematics, the Baker Award for Electronics, and the UNESCO Kalinga Prize for the popularization of science. His research interests lie in theoretical high energy physics. Dr. Hoodbhoy has spoken and written extensively for over 25 years against nuclear weapons in South Asia, produced a widely viewed documentary film "Pakistan and India Under The Nuclear Shadow", was a member of the Pugwash Council, and is a sponsor of the Bulletin of the Atomic Scientists. As an advocate of the scientific method, he authored "Islam and Science: Religious Orthodoxy and the Battle for Rationality", now in seven languages. He was a post doctoral fellow at the University of Washington in Seattle and a visiting professor at MIT, Carnegie Mellon University, and the University of Maryland. As a film maker, Dr Hoodbhoy produced several documentary series for Pakistan Television aimed at popularizing science, and on analyzing the Pakistani education system. He heads a book publishing organization in Lahore focusing on modern thought and human rights.