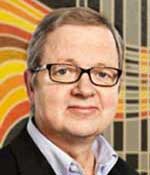 
"For seminal contributions to our understanding of the photophysics of low dimensional material systems, revealing the rich optical properties of plasmons, excitons, and electrons in confined geometries."


Prof. Peter Nordlander obtained his BS degree (1980) and PhD (1985) in Theoretical Physics at Chalmers University of Technology in Gothenburg in Sweden. After postdoctoral positions at IBM Thomas J. Watson Research Center at Yorktown Heights, AT&T Bell Laboratories at Murray Hill, and Rutgers Universities, in 1989 he joined the faculty at Rice University where he is currently Professor of Physics and Astronomy and Electrical and Computer Engineering. He has been a Visiting Professor at University of Paris and at the Institute of Physics at the Chinese Academy of Sciences and is currently a visiting professor at Peking University. His research background is in theoretical condensed matter physics and nanophysics. His current research is focused on the theoretical and computational modeling of Plasmonics and Nanophotonics phenomena. Recent contributions include the development of the Plasmon Hybridization method, the theory for plasmonic Fano resonances and the field of Quantum Plasmonics. He is an associate editor of ACS Nano. He is a fellow of APS, AAAS, SPIE, and OSA and is the recipient of the 1999 Charles Duncan Award for Outstanding Academic Achievement and the 2013 Willis E. Lamb Award for Laser Science and Quantum Optics.