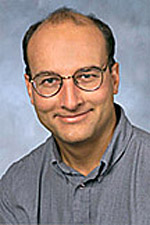 
"For an exquisite series of experiments using high intensity lasers to measure the high pressure properties of hydrogen across the molecular insulator to monatomic metal transition."


Dr. Celliers received a BS in Engineering Physics from Queen's University, Canada in 1980, and a Ph.D. in Plasma Physics from the University of British Columbia in 1987. His thesis work examined laser driven shock waves in fused silica. In 1988 he worked as a post-doctoral scientist at the Max-Planck Institute for Quantum Optics, in Garching, Germany, studying x-ray conversion in high Z laser-produced plasmas. In 1989 he returned to the University of British Columbia as a research associate to continue research on laser-driven shock waves. From 1992 to 1994 he worked for an industrial firm developing spectrometers for plasma-based analytical instrumentation. In 1994, Dr. Celliers joined Lawrence Livermore National Laboratory as a staff scientist where he has worked on a variety of projects including applications of x-ray lasers for plasma probing, and laser-produced x-ray sources for lithography. More recently he has returned to laser-driven shock research for equation of state measurements and other applications in the inertial confinement program. He also is interested in laser-tissue interactions and is actively developing optical and opto-accoustic diagnostic and therapeutic techniques for medical and industrial applications of lasers.

Dr. Celliers is a member of the American Physical Society.