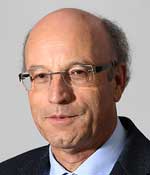 
"For distinguished leadership in the conception, design, and construction of the ATLAS and CMS detectors, which were instrumental in the discovery of the Higgs boson."


Peter Jenni completed his undergraduate work in physics in 1973 at the University of Bern (Switzerland) and his doctorate in 1976 at the Swiss Federal Institute of Technology in Zurich (ETHZ). Prof. Dr. Jenni participated in CERN experiments in Geneva, Switzerland, at the synchrocyclotron at the proton synchrotron, and as an ETHZ research associate at the Intersecting Storage Rings, the first high-energy hadron collider. From 1978 to 1979, Prof. Dr. Jenni was a research associate at the Stanford Linear Accelerator Centre. He became a CERN staff member in 1980 with the UA2 experiment at the super proton synchrotron with major involvement in the discoveries of jets and the W/Z bosons. In 1984, Prof. Dr. Jenni’s primary focus was in the large hadron collider (LHC). After 1991, his main activities concentrated on tasks related to being the unofficial spokesperson of a LHC proto-collaboration, developing a general purpose detector concept. In 1995, after formal approval of A Toroidal LHC Apparatus (ATLAS), Prof. Dr. Jenni was elected official spokesperson (project leader). He was re-elected several times and retired from this duty in February 2009. Since his retirement from CERN in April 2013, Prof. Dr. Jenni is an honorary professor with the Albert Ludwigs University of Freiburg (Breisgau, Germany), keeping his full engagement with the ATLAS experiment. He has been honored with  the 1998 Swiss Greinacher Prize, the 1999 Slovak Gold Medal of the Comenius University, the 2001 Charles University Silver Medal, the 2012 Czech Academy of Sciences Ernst Mach Honorary Medal, and the 2013 Julius Wess Award. He also won a share of the 2013 Special Fundamental Physics Prize, and a share of the 2013 European Physical Society High Energy Physics Prize. Prof. Dr. Jenni has honorary doctorates  from the University of Stockholm (Sweden), the University of Copenhagen (Denmark),ETHZ (Switzerland), the University of Nova Gorica (Slovenia), the University of Bern (Switzerland), Aix-Marseille University (France), Universidad Catolica de Chile, and Tbilisi State University (Georgia).