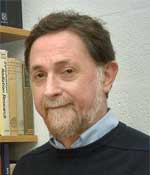 
"For innovations in angle-resolved photoemission spectroscopy, which advanced the understanding of the cuprate superconductors, and transformed the study of strongly-correlated electronic systems."


Peter D. Johnson is a Senior Physicist and Chair of the Condensed Matter Physics and Materials Science Department at Brookhaven National Laboratory.  He obtained a B.Sc from Imperial College, London in 1972 and a Ph.D from Warwick University in 1978.  After a period as a Research Associate at Warwick University working on Photoemission and Photoelectron Diffraction he joined Bell Laboratories in 1981 to work on Inverse Photoemission.  In 1983 he joined the Physics Department at Brookhaven National Laboratory and continued the developments of the Inverse Photoemission technique, Spin Polarized Photoemission and more recently High Resolution Photoemission.  Key discoveries include Image States, a new class of surface electronic state, spin polarized quantum well states in thin film and multilayer systems, mass renormalization in the cuprate superconductors and a particle-hole asymmetry in the underdoped cuprates.  He introduced new methods of analysis into photoemission including the now widely used Momentum Distribution Curves.  Peter D. Johnson was awarded the 2001 Brookhaven Science and Technology Award and is a Fellow of the American Physical Society, the American Association for the Advancement of Science and the Institute of Physics in the UK.