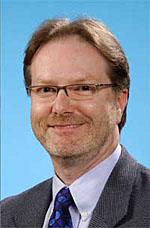 
Peter Norreys graduated from Queen Mary College, University of London in 1983 with a bachelor's degree in Physics and Astronomy. He started his study of laser-plasma interaction physics at Royal Hollow College, University of London under the supervision of Dr Eric Wooding and Dr Mike Key in 1984. His topic of study was an experimental investigation into the uniformity of ablation in 12-beam spherical symmetry using the Vulcan laser facility. After obtaining his PhD in 1988, he was awarded a JSPS post-doctoral fellowship to continue his studies at the Institute of Laser Engineering at Osaka University, Japan. He took up a position at the Rutherford Appleton Laboratory upon his return to the UK in 1990. He has held a number of UK research council grants (in collaboration with colleagues from Imperial College London and other UK and international universities) that have investigated high intensity laser-plasma interaction physics relevant to fast ignition of fusion targets. He has led the Physics Group at the Central Laser Facility since 2001, and is currently a visiting Professor of physics at the Blackett Laboratory, Imperial College London.