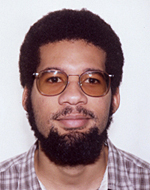 
As an undergraduate, Onyisi's research was focused on searching for unknown particles in proton-antiproton collisions at the Fermilab Tevatron. Using data from the CDF detector, he searched for high-momentum undetectable particles recoiling against photons; not finding an excess above the predictions of the Standard Model, he derived limits on the mte at which unknown processes occur. These limits can be interpreted in the context of theories involving supersymmetry or large extra dimensions. While at the University of Chicago, Onyisi received a Goldwater scholarship and the physics department's Grainger senior scholarship, and graduated in 1999 with a BA in physics and applied mathematics. With funding l%om an NSF fellowship, he is now pursuing a Ph. D. at Cornell University, where he intends to study the physics of mesons containing the charm quark.