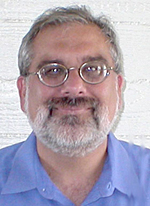 
"For his conceptual breakthroughs in protein dynamics and protein folding, and his critical insights toward the understanding of how proteins work at the most fundamental level."


Wolynes received his bachelors degree from Indiana University in 1971 and his Ph.D. in Chemical Physics from Harvard University in 1976. After a postdoc at M.I.T., he returned to the faculty at Harvard. In 1980 he joined the faculty at the University of Illinois, moving to the University of California, San Diego in 2000, where he holds the Francis Crick Chair and is a member of the Departments of Chemistry and Biochemistry and of Physics. His research has ranged widely over many areas of theoretical chemistry, physics and biology including theories of chemical reactions and quantum many body phenomena in liquids and biomolecules and the theory of glasses. He is most well known, however, for his development of the energy landscape theory of protein folding which brought the perspective of modern statistical mechanics to this central problem of molecular biology leading to new approaches for predicting protein structure from sequence. Wolynes is a member of the National Academy of Sciences and a Fellow of the APS, the Biophysical Society, AAAS and the American Academy of Arts and Sciences. He has received the Award in Pure Chemistry (1986), and the Peter Debye Award in Physical Chemistry, (2000) both from the American Chemical Society.