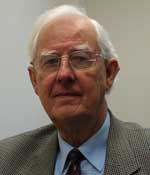 
"For pioneering and sustained theoretical development of R-Matrix computational methods for electron-atom and electron-molecule collisions important in modeling ionized gases and plasmas."


Emeritus Professor Phil Burke obtained his B.Sc in Physics from University College Exeter in 1953 and his PhD in theoretical nuclear physics at University College London in 1956 under the supervision of Sir Harrie Massey. He was appointed Assistant Lecturer in the University of London Computer Centre in 1957. In 1959 Burke took up an appointment at the Lawrence Radiation Laboratory Berkeley where he carried out research in Luis Alvarez’s Bubble Chamber group and in Ken Watson’s theory group. He returned to the UK in 1962 to take up an appointment at the Atomic Energy Research Establishment Harwell. In 1967 he was appointed Professor of Mathematical Physics in Sir David Bates’s department at Queen’s University Belfast where he established his group which uses R-matrix computational methods in the study of collision processes in atomic, molecular and optical physics of importance in many applications including the analysis of astronomical observations and the modeling of ionized gases and plasmas. Burke is a Fellow or Member of several societies including the Royal Society, the Royal Irish Academy, the Institute of Physics, the American Physical Society, the Royal Astronomical Society and the European Physical Society and has received a number of awards and honours including D.Sc Honoris Causa, University of Exeter in 1981 and Queen’s University Belfast in 1999, Fellow of University College London in 1986, CBE in 1993, the Guthrie Medal and Prize
in 1994, and the David Bates Prize in 2000.