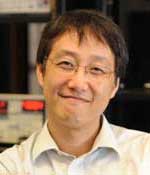 
"For his discoveries of unconventional electronic properties of graphene."


Philip Kim was born and raised in Seoul, Korea. He received his B.S in physics at Seoul National University in 1990 and received his Ph. D. in Applied Physics from Harvard University in 1999. He was Miller Postdoctoral Fellow in Physics from University of California, Berkeley during 1999-2001. In 2002, he joined in Department of Physics at Columbia University as a faculty member, where he is now Professor of Physics. The focus of Prof. Kim’s group research is the mesoscopic investigation of transport phenomena, particularly, electric, thermal and thermoelectrical properties of low dimensional nanoscale materials. Professor Kim is Fellow of American Physical Society and received numerous awards including Dresden Barkhausen Award, IBM Faculty Award and Ho-Am Science Prize.