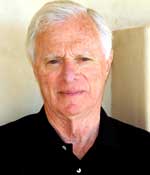 
"For pioneering developments in the physics of the inverse scattering problem: new applications of laser light scattering and the successful sustained commercialization of new related analytical methods and instrumentation."

Background:
Wyatt is a Fellow of both the American Physical Society and the Optical Society of America. His other memberships include Sigma Xi, Sigma Pi Sigma, American Chemical Society, American Society for Microbiology, American Association of Pharmaceutical Scientists, and AAAS. He was nominated by the National Academy of Sciences as one of sixteen candidates for the first Scientist-Astronaut Selection Program (1965). In 2003, he was named Graduate of Distinction by the College of Arts and Sciences at FSU. He has served on the Executive Committees of GIMS and FIAP. He is Registered Agent before the U. S. Patent and Trademark Office.