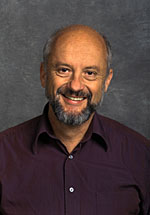 
"For his insightful proposal to use an asymmetric B-Factory to carry out precision measurements of CP violation in B-meson decays, and for his energetic leadership of the first conceptual design studies that demonstrated the feasibility of this approach."


Dr. Pier Oddone serves as the Deputy Director of the Berkeley Lab, responsible for scientific programs. As part of his charge he oversees major Laboratory initiatives and strategic planning.

Dr. Oddone was director of the Physics Division at Berkeley Lab from 1987 through 1991. In 1987, he proposed the ides of using an Asymmetric B-factory to study the violation of CP symmetry in the decay of B-mesons. Two such facilities were built, one at the Stanford Linear Accelerator Center and one at the KEK, the Japanese particle accelerator laboratory. Experiments at these facilities led to the first observation of CP violation in B meson decays.

In the late seventies and early eighties, Dr. Oddone was a member of the team that developed the first Time Projection Chamber (TPC). This technology was subsequently used for many particle and nuclear physics experiments. He led the TPC collaboration from 1984 to 1987.

Dr. Oddone was born in Peru. He obtained his BS degree in Physics at MIT in 1965 and his PhD in Physics at Princeton in 1970. He was a postdoctoral fellow at Caltech until 1972 when he joined the Berkeley Lab. Dr. Oddone is a fellow of the American Physical Society.