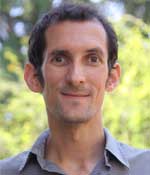 
Dr. Pierre Michel received undergraduate degrees in Physics and Photonics from Strasbourg University (France) in 2000; he got his Ph.D. with highest honors from Ecole Polytechnique, Paris in 2003, for his work on laser-plasma interactions for inertial confinement fusion applications. From 2004 to 2006 he worked on laser-plasma acceleration of particles and its applications for x-ray sources at the LOASIS program of Lawrence Berkeley National Laboratory, where he was awarded the “A.M. Sessler” post-doctoral fellowship. He then joined Lawrence Livermore National Laboratory in 2006 where he is currently a staff scientist pursuing numerical, theoretical and some experimental work on laser-plasma interactions. In particular, he conducted numerical and theoretical work on the physics of power transfer between laser beams crossing in plasmas and its possible applications for symmetry tuning on the National Ignition Facility; this scheme was experimentally demonstrated a year later and has been routinely used since then. Dr. Michel has been leading the National Ignition Campaign’s “laser-plasma interaction working group” since 2009. He is a member of the American Physical Society.