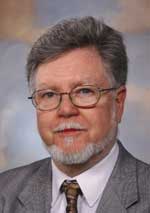 
"For the pioneering development of the atmospheric fluorescence technique as a method for exploring the highest energy cosmic rays."