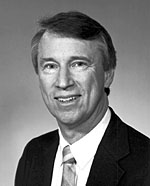 
"For his intellectual and experimental leadership in seminal experiments testing charge symmetry and independence, determining fundamental properties of nuclear reactions having cosmological and astrophysical significance, and establishing stringent limits on the mass of the electron antineutrino."


Dr. Robertson is a native of Canada who received his BA from Oxford University in 1965 and his Ph.D. in nuclear physics from McMaster University in 1971. He received a postdoctoral fellowship at Michigan State University where he continued his work and became a Professor of Physics in 1981. While at Michigan State his research resulted in the first observation of an isobaric quintet of states in nuclei. He also carried out experiments on parity violation, nuclear astrophysics and nuclear reactions. In 1981 he joined the Los Alamos National Laboratory, becoming a fellow at Los Alamos in 1988. There he investigated neutrino mass via tritium beta decay and solar neutrino experiments. In 1994 he became a Professor of Physics at the University of Washington where he is continuing his work on neutrinos, particularly at the Sudbury Neutrino Observatory.

Dr. Robertson is a member of the Canadian Association of Physicists , a fellow of the APS, and an associate member of the Institutue of Physics (London). He has chaired the Nuclear Science Advisory Committee and served on its instrumentation subcommittee. He serves on the Board of Physics and Astronomy of the National Research Council and has served on committees for the NRC, the APS, NSERC (Canada), NSF, DOE and the editorial board of Physical Review D.