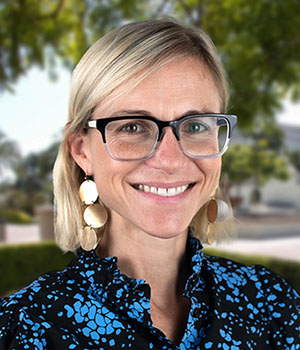 
"For pioneering microrheology and microscopy experiments that elucidate the mechanics and dynamics of bio-inspired soft matter systems and complex biopolymer networks, and advancing undergraduate physics research and curriculum."


Robertson-Anderson received her BS in Physics from Georgetown University in 2003, funded by a Clare Boothe Luce Scholarship. She earned her PhD in Physics from University of California, San Diego in 2007, funded by an NSF Graduate Research Fellowship, after which she was awarded an NIH fellowship to pursue a molecular biology postdoc at The Scripps Research Institute. In 2009, Robertson-Anderson joined the faculty at University of San Diego with the goal of engaging undergraduates in cutting-edge research and shaping undergraduate physics programs and research at a national level. She served as department Chair for 8 years, overhauling the physics curriculum and research culture, and establishing an interdisciplinary Biophysics BS that has served as a model for liberal arts institutions nationally. Robertson-Anderson’s research program aims to elucidate microscale mechanics and macromolecular transport in bio-inspired soft and active matter systems. Her lab has pioneered novel optical tweezers microrheology and fluorescence microscopy techniques to probe these systems across decades of spatiotemporal scales. She is also a leading expert in engineering biopolymer networks that leverage biological design paradigms to solve problems in soft and active matter physics. Robertson-Anderson has been awarded over $5M to fund her research program, including a Keck Foundation Research Grant, NSF CAREER Award, and Air Force Young Investigator Award. In 2022, she was awarded a Research Corporation Cottrell Scholars STAR Award for her excellence in research and teaching, and was named an APS Fellow. 44 of Robertson-Anderson’s 67 publications include undergraduate co-authors, totaling 76 contributions from 36 undergraduates.