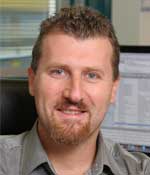 
"For exceptional contributions to the understanding of self-assembly principles and their use to design and control materials with targeted functionalities."


Raffaele Mezzenga received his master degree (Summa Cum Laude) from Perugia University, Italy, in Materials Science and Engineering, while actively working for the European Center for Nuclear Research (CERN) and NASA on elementary particle-polymer interactions (NASA Space Shuttle Discovery mission STS91). In 2001 he obtained a PhD in Polymer Physics from EPFL Lausanne, focusing on the thermodynamics of reactive polymer blends. He then spent 2001-2002 as a postdoctoral scientist at University of California, Santa Barbara, working on the self-assembly of polymer colloids. In 2003 he moved to the Nestlé Research Center in Lausanne as research scientist, working on the self-assembly of surfactants, natural amphiphiles and lyotropic liquid crystals. In 2005 he was hired as Associate Professor in the Physics Department of the University of Fribourg, and he then joined ETH Zurich on 2009 as Full Professor. His research focuses on the fundamental understanding of self-assembly processes in polymers, lyotropic liquid crystals, food and biological colloidal systems. Prof. Mezzenga has a visiting Professorship from Helsinki University of Technology, he has been a Nestlé Distinguished Scientist, is a board member of the Polymer and Colloid Division of the Swiss Chemical Society, and recipient of the 2004 Swiss Science National Foundation Professorship Award.