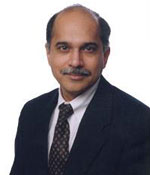 
"For his innovative applications of field theoretic techniques to quantum condensed matter systems, and his marvelous presentations of the story of physics through teaching, lectures, textbooks, and public talks."


Ramamurti Shankar obtained his B. Tech (Electrical Engineering) at the Indian Institute of Technology in 1969. Inspired by the Feynman Lectures he switched to Physics, obtaining his Ph.D. in 1974 in S-matrix theory at Berkeley under Geoffrey Chew. After spending 1974-77 at the Harvard Society of Fellows, he joined Yale as J.W. Gibbs Instructor where he is the John Randolph Huffman Professor. He was chair between 2001-2007. He has contributed to the determinations of the quark gluon coupling constant, exact S-Matrices (with Witten), self-triality in statistical mechanics and field theory, exact solutions of disordered Ising models (with Murthy), renormalization group for Fermions and Landaus Fermi liquid, Hamiltonian theory of the Fractional Quantum Hall effect (with Murthy) and the solution of disordered and chaotic quantum dots (with Murthy). He is a Fellow of the APS and Trustee of the Aspen Center for Physics. He authored Principles of Quantum Mechanics and Basic Training in Mathematics and won the Harwood F. Byrnes/Richard B. Sewall Teaching Prize at Yale. The video of his Physics 200 (http://open.yale.edu/courses/physics/index.html) is available gratis. His public lecture When you come to a fork in the road take it: Yogi Berras guide to the quantum world explains Feynmans sum over paths.