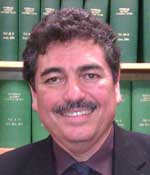 
"For his contributions to the understanding of magnetic storms, substorms, and solar wind-magnetosphere coupling, his communication of space science to the public, and his extensive work in physics education at all levels."


Ramon E Lopez is a Professor of Physics at the University of Texas at Arlington. He received a B.S. in Physics from the University of Illinois, Urbana-Champaign, in 1980, and his Ph.D. is Space Physics from Rice University in 1986. His primary research is in space plasma physics, focusing on solar wind-magnetosphere interactions, magnetic storms and substorms, and space weather. He also has an active research program in physics education, with an emphasis on studies of spatial/visual cognition. Dr. Lopez is a Fellow of the American Physical Society (APS), in 2002 he was awarded the APS Nicholson Medal, and he has received other awards for his work both in space physics and education from organizations such as NASA and SACNAS. In addition to his physics research, Dr. Lopez is engaged on a national level in K-12 science education. He was a member of the writing team for the College Board's Standards for College Success Science Standards, and is a member of the team leading the development of the Next Generation Science Standards. He is also active in the communication of space science to the public, publishing in 2002 Storms from the Sun, a popular science book about space weather.