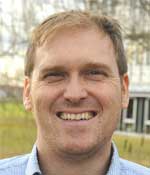 
Randolf Pohl received his Diploma in Physics from the Technical University of Munich in 1997, doing laser spectroscopy on antiprotonic helium at CERN.  He received his Ph.D. in Physics from ETH Zurich in 2001 for the observation of the long-lived 2S state in muonic hydrogen.  From 1998 he was member of the muonic hydrogen Lamb shift collaboration at PSI, Switzerland, which, in 2009, succeeded to measure for the first time the Lamb shift (2S-2P energy difference) in muonic hydrogen, yielding a ten times more accurate value of the proton charge radius.  In 2005 Pohl joined the Laser Spectroscopy group at the Max Planck Institute of Quantum Optics in Garching, Germany. Since 2009 Pohl has been doing laser spectroscopy on the 1S-2S and 2S-4P transitions in regular hydrogen and deuterium.  At present, Pohl works on the CREMA project (Charge Radius Experiment with Muonic Atoms) which aims at measuring the Lamb shift in muonic helium-3 and -4 ions, again at PSI. He received a European Research Council Starting Grant for CREMA in 2011. Pohl jointly received the 2012 Gustav-Hertz prize of the German Physical Society.  He is a member of the American, European and German Physical Societies.