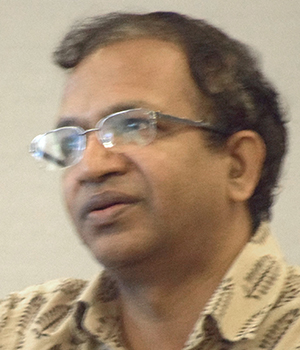 
"for his continued research in physics while simultaneously advocating for global policies that reflect science; for leading sustainable development, human rights, and social justice efforts; and for creating a vibrant international volunteer movement that learns from, works with, and empowers communities in India."


Ravi Kuchimanchi obtained a B.Tech in engineering from the Indian Institute of Technology, Mumbai, in 1985 and a Ph.D. in physics from the University of Maryland in 1995. While a graduate student, Ravi founded the Association for India’s Development (AID) with the idea of creating a channel to connect with the villages of India. After his postdoctoral work, Ravi began to focus his attention on human rights and social justice issues in India such as renewable energy, sustainable livelihoods, and struggles of marginalized people. It became clear to Ravi that a laborer earning a dollar a day lived in darkness, not because of her electricity bill, but due to the large bribe for the initial connection. Such insights helped AID tackle root causes such as corruption and exploitation rather than symptoms of poverty. AID (aidindia.org) mobilizes nearly a thousand volunteers and raises $2 million annually. As a result of his charitable work, Ravi received the International Alumnus Award from University of Maryland in 2012, and in 2011, AID won the Times of India Social Impact Award which Ravi and his colleagues received from the Indian prime minister. Ravi’s 2015 paper in the journal, Physical Review D, provides a way to test if parity is a good symmetry of nature, even if the parity breaking seesaw scale is well beyond collider reach. Ravi finds that in significant regions of the minimal Left Right Symmetric Model, the leptonic CP phase must be absent (sin \delta_CP = 0) as it generates a large strong CP phase in one loop.