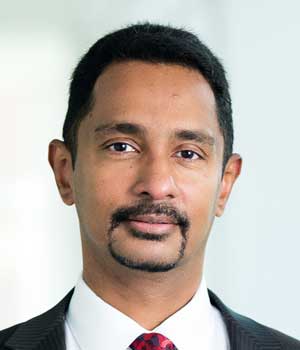 
"For far-reaching, multi-faceted and impactful contributions as an educator and academic leader, including authoring popular books and articles about physics for adults and children, making frequent public speaking and media appearances, developing innovative outreach programs, and founding the Science Leadership Program."


Ray Jayawardhana is the Harold Tanner Dean of Arts and Sciences and Professor of Astronomy at Cornell University. A graduate of Yale and Harvard universities, he investigates planetary origins and diversity using leading-edge observational facilities, engaging with the general public through writing, speaking, media appearances and other outreach activities. He is the co-author of more than 125 refereed papers in scientific journals, and his findings have made headlines worldwide. Recently his research group has focused on characterizing exoplanets and brown dwarfs using photometry from the Kepler space telescope and spectroscopy with ground-based observatories. Ray is an award-winning writer whose articles have appeared in The Economist, New York Times, Wall Street Journal, Washington Post, Boston Globe, The Atlantic, Muse, Scientific American, and more. His book ``Strange New Worlds" was the basis of a television documentary on the CBC, while Neutrino Hunters won the CSWA Book Award. Ray is the recipient of a Guggenheim Fellowship, a Radcliffe Fellowship, a Steacie Fellowship and a Steacie Prize, a Rutherford Medal, and a McLean Award. Asteroid (4668) Rayjay  is named after him.