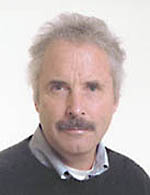 
"For his leadership in pioneering measurements of the electromagnetic properties of nuclei and nucleons at short distance scales that addressed the fundamental connection of nuclear physics to Quantum Chromodynamics and motivated new experimental programs."


Dr. Raymond Arnold received his BA from Alaska Methodist University, Anchorage, Alaska (now Alaska Pacific University), in 1964 and his Ph.D. in Physics from Boston University in 1972, working with Prof. Edward Booth. He accepted a post-doctoral position in 1972 to work with Prof. Benson Chertok of American University on a series of experiments using the high energy electron beam at the Stanford Linear Accelerator Center to measure the structure of the deuteron, He, and various heavier nuclei.

Throughout the 1980's and the 1990's, Dr. Arnold participated as group leader or spokesman in more than a dozen experiments measuring elastic and inelastic electron scattering at high energy to determine quark structure of the proton, neutron and various nuclei. In 1984, he proposed and helped organize an experimental program called NPAS (Nuclear Physics at SLAC) that operated for five years using the electron beam and the facilities of SLAC End Station A for a series of nuclear structure measurements. Since 1995 he has been co-spokesman for three experiments that measured the deep inelastic spin structure functions of the proton and neutron using the SLAC polarized electron beam and cryogenic polarized targets.