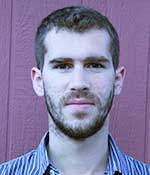 
"For the development, implementation, and application of new algorithms toward the improvement of laser-wakefield accelerators."


Remi Lehe received his B.S. in physics in 2011 from Ecole Normale Superieure (France) and obtained his Ph.D. in 2014 from Ecole Polytechnique (France), under the supervision of Dr. Victor Malka. His Ph.D. work focused on Particle-In-Cell (PIC) simulations of laser-plasma accelerators. In particular, in order to mitigate numerical artifacts (esp. numerical Cherenkov effect), he developed an alternative finite-difference Maxwell solver, which is now implemented in several PIC codes used by research teams throughout the world (Osiris, PIConGPU, Warp, Calder). He also used this solver to simulate and analyze several physical schemes that improve the quality of laser-wakefield accelerators. This work has been recognized by the Ph.D. Prize of Ecole Polytechnique, and the John Dawson Prize of the Laser-Plasma Accelerator Workshop. Lehe is now a postdoctoral fellow at Lawrence Berkeley National Laboratory. His research currently focuses on high-accuracy spectral PIC algorithms, and on various means to speed up large-scale simulations of laser-plasma accelerators.