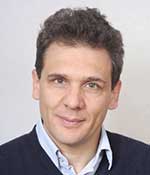 
"For groundbreaking work applying spin glass ideas to ensembles of computational problems, yielding both new classes of efficient algorithms and new perspectives on phase transitions in their structure and complexity."


Riccardo Zecchina graduated from the Polytechnic University of Turin (Italy) in 1988 and received a Ph.D. in theoretical physics from the University of Turin in 1993. He was a research scientist at the International Centre for Theoretical Physics (Triest) between 1997 and 2007, where he headed the Statistical Physics group. In 2007 became a full professor in Theoretical Physics at the Polytechnic University of Turin. Trained as a statistical physicist, Zecchina's research has explored the intersections between statistical physics of disordered systems, discrete mathematics and computer science. He has studied particularly the algorithmic implications of statistical physics methods, developing novel distributed algorithms for optimization problems over large scale networks of constraints. In recent years, he has focused on applications to inverse problems in computational biology, computational neuroscience and machine learning. Zecchina has been long term visiting scientist at Microsoft Research and at the University of Paris Sud. He is also Head of the Statistical Inference Unit at the Human Genetics Foundation and Fellow of the Collegio Carlo Alberto.