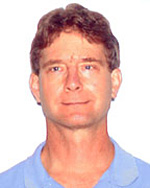 
Since obtaining his B.S. in physics from St. John's University, Collegeville, MN (1971) and his Ph.D. from the University of Wisconsin, Madison (1979), Dr. Richard Groebner has been employed by General Atomics in San Diego, CA. A major focus for Dr. Groebner has been the development of diagnostic techniques, using charge exchange recombination spectroscopy, for the measurement of ion temperature and velocity profiles. He implemented such a system to study the boundary plasma on the DIII-D tokamak and discovered that the edge radial electric field became more negative when the plasma made a transition to an improved confinement mode, called the H-mode. Subsequently, he obtained the first evidence that the good confinement zone of the H-mode occurred in a region of high spatial shear in the radial electric field, as had been predicted by theory. Further studies showed that these observations were general features of H-modes in DIII-D. He has helped foster H-mode research as leader of the H-mode Working Group for the Transport Task Force ans as leader of the H-mode studies on DIII-D. Dr. Groebner presented a review talk on H-mode Physics at the 1992 APS-DPP meeting. He is a Fellow of the American Physical Society.