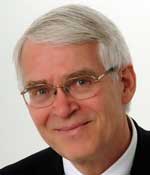 
"For championing a close connection between an enriching advanced laboratory program and quality undergraduate research, taking formative roles in organizations such as the Advanced Laboratory Physics Association and American Association of Physics Teachers."


Richard W. Peterson, Ph.D., received his B.S. in physics and mathematics from the University of Wisconsin— River Falls in 1964 and his M.S. and Ph.D. in physics from Michigan State University (Lansing) in 1966 and 1969 respectively. Dr. Peterson’s interest in optical metrology grew while he did his postdoctoral fellowship in plasma diagnostics at Los Alamos National Laboratory in New Mexico. As a professor and chair of physics at Bethel University (St. Paul, Minn.), since 1980, Dr. Peterson has worked with dozens of students in developing new methods for fast interferometric and holographic measurements. He is the recipient of an American Physical Society (APS) prize for research at an undergraduate institution and was elected an APS fellow in 2005. Dr. Peterson was elected to the presidential track of the American Association of Physics Teachers (AAPT) between 2003 and 2007, and became an AAPT fellow in 2015. Since 2010, when The Optical Society (OSA) recognized him as a Senior Member for work in optics and photonics, Dr. Peterson has been a traveling OSA lecturer. He especially enjoys the development of apparatus for interactive physics demonstrations and has shared these presentations globally. Dr. Peterson completed a 2010-2012 appointment as a National Science Foundation (NSF) rotating program director in the NSF’s undergraduate education division. He also was the NSF’s principal investigator in support of AAPT’s “Lab Focus ’93” conference that brought together high school teachers and instructors from university advanced laboratories. Throughout his career, Dr. Peterson has championed project-based advanced labs for enhancing creativity, and for providing a bridge to undergraduate research. He has introduced several experimental project areas in the Advanced Lab Physics Association (ALPhA) immersions and AAPT summer meetings, and was one of several leaders to help bring greater visibility and community support for hundreds of faculty members and staff workers in advanced physics laboratories nationally, resulting in the formation of ALPhA.