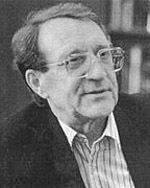 
Dr. Roald Sagdeev is a Distinguished University Professor of the University of Maryland, College Park, and Director of the East West Space Science Center in the Department of Physics. After graduation from Moscow State University he became a member of the Controlled Fusion team at Kurchatov Institute of Atomic Energy in Moscow (1956-1961). In his early work he developed the kinetic theory of plasma in "drift" (guiding center) limit. That resulted in a discovery (coauthored with L. Rudakov) of instabilities of a plasma with anisotropic velocity distribution: "diamagnetic" (mirror) and "centrifugal" (fire hose) made independently from Americans before the Fusion program was declassified. Direct extention of this work beyond drift approximation led soon to the formulation of the class of cyclotron ("pitch angle") instabilities (jointly with V. Shafranov). Later these results provided the basis for Kennel-Petchek model of the radiation belt dynamics and a mechanism of generation of Alfvén waves turbulence in Cosmic Ray Shocks.

In 1960-1961 Sagdeev (in co-authorship with Rudakov) discovered a new mode of plasma waves in non-uniform plasmas: drift waves (non- Zero kz <<ky). Ion temperature gradient instability was among major results in this area.

At Kurchatov Institute Roald Sagdeev was a driving force to develop an understanding of non-linear phenomena in rarefied plasmas. In a "laminar" behavior he predicted the solitary waves: magnetic "compression" and "rarefaction" solitons and ion acoustic one, and their interrelation to a dispersion properties of waves propagation in plasma. For turbulent plasmas he developed a Quasilinear Theory (QLT) (together with A. Vedenov and E. Velikhov) and applied it to a Beam-Plasma (plasma waves) and Pitch Angle Instabilities (cyclotron waves).

In 1961 Roald Sagdeev founded Plasma Theory Lab at Budker Institute of Nuclear Physics in Novosibirsk. There during his tenure (up to 1971) he and his teammates significantly expanded the original scope of non-linear plasma works. Discovery of parametric decay instabilities led to the formulation of a weak turbulence approach (with A. Galeev and V. Karpman) and linkage of non-linear chaotic dynamics of Hamiltonian systems (in co-authorship with G. Zaslavsky) with QLT as a limiting case opposite to KAM (Kolmogorov-Arnold-Moser) case.

In 1966 Sagdeev and Marshall Rosenbluth co-chaired highly successful Plasma Theory Year in Trieste International Center of Theoretical Physics. Among immediate results of Trieste group were chaotic destruction of magnetic surfaces and "diffusion" of magnetic field lines analogous to the quasilinear one (with J.B. Taylor, M. Rosenbluth and G. Zaslavsky). The neoclassical theory of transport in toroidal systems (together with A. Galeev) was conceived in Trieste. The bulk of the job was done later in Novosibirsk (plateau behavior of transport, banana regime and bootstrap current). The subject of collisionless shocks transcends all of Roald Sagdeev scientific career: from early theoretical prediction (1956) to interconnection to solitons, intrinsic instabilities and resulting anomalous transport (e.g. anomalous resistivity.

In 1973-1988 he was the Director of Moscow's Institute for Space Research to lead the major Russian efforts in Space Exploration, including the spacecraft encounter with Comet Halley. The science aside R. Sagdeev was involved in political life as advisor to M. Gorbachev and E. Shevardnadze on Arms Control and Space. In 1989 he was elected to the U.S.S.R. Congress of Peoples