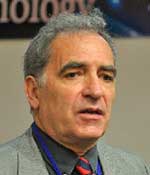 
"For his wide-ranging contributions to biological physics encompassing all scales from the molecular to that of organismic populations. His early insights on how nanotechnology and microfabrication can be employed have uncovered both new physics and revolutionized the laboratory practice of biology."


Professor Robert H. Austin received his B.A. in Physics from Hope College in Holland, Michigan and his Ph.D. in Physics from the University of Illinois Champaign-Urbana in 1975. He did a post-doc at the Max Planck Institute for Biophysical Chemistry from 1976–1979 and has been with the Department of Physics of Princeton University from 1979 to the present, achieving the rank of Professor of Physics in 1989.