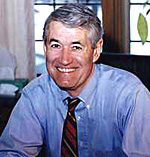 
"For using neutron and x-ray scattering to elucidate the structure, phase transitions, and excitations of materials that are paradigms of important statistical mechanical models, and for his ability to convey the excitement of physics to a broad range of audiences."


Professor Birgeneau received his Ph.D. in Physics from Yale University in 1966 with Professor Werner Wolf. He was on the faculty of Yale for one year and then spent one year at Oxford University. He was at Bell Laboratories from 1968 to 1975 and then came to MIT in September 1975 as Professor of Physics. He has been at MIT since then. In 1988 he became head of the department and in 1991 became Dean of Science. Prof. Birgeneau's research is primarily concerned with the phases and phase transition behavior of novel states of matter. These include one and two dimensional quantum magnets, liquid crystals, physisorbed and chemisorbed surface monolayers, clean metal and semiconductor surfaces, graphite intercalates, highly disordered magnets and lamellar CuO2 superconductors. He uses primarily neutron and x-ray scattering techniques to probe these systems.