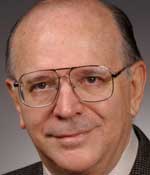 
"For the invention and development of electron spin sources and detectors, and their application to measurement science."


Robert Celotta is the Director of the Center for Nanoscale Science and Technology at the National Institute of Standards and Technology. Prior to that, he was a NIST Fellow and Leader of the Electron Physics Group. His most recent research activities included nanomagnetics, magnetic imaging, the use of scanning tunneling microscopy for nanostructure characterization and assembly, the optical control of free atoms, and the generation, detection, and application of free electron polarization to measurement. Dr. Celotta received his B.S. in physics from the City College of New York in 1964 and his Ph.D. in physics from New York University in 1969. He was a Postdoctoral Fellow at JILA in Boulder Colorado with Nobel Laureate Dr. John Hall. Dr. Celotta has received the Gaede-Langmuir Prize of the AVS, the William P. Slichter and the Edward Uhler Condon Awards of the NIST, two IR-100 Awards, and Gold and a Silver Medals from the US Department of Commerce. He twice received Presidential Distinguished Rank Award. He is a Fellow of the American Physical Society, the American Association for the Advancement of Science, and the AVS.