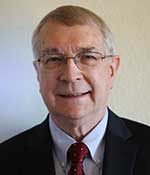 
"For outstanding leadership in research and development of semiconductor manufacturing technology and integrated circuit device scaling."


Robert Doering received a B.S. degree in physics from the Massachusetts Institute of Technology (MIT) in 1968 and a Ph.D. in physics from Michigan State University (Cyclotron Lab) in 1974. He joined TI in 1980 after several years at the University of Virginia. His academic research was highlighted by the discovery of the Giant Spin-Isospin (Gamow-Teller) Resonance in heavy nuclei. Subsequently, he was Director of the DARPA-USAF-TI Microelectronics Manufacturing Science & Technology Program, which pioneered many semiconductor single-wafer manufacturing technologies in wide use today, such as rapid thermal processing. Doering is currently Research Manager for the Technology and Manufacturing Group at Texas Instruments. His current efforts are primarily on the development of new analog device technologies, including novel sensors. He is a Fellow of the APS and the IEEE. He is on the Board of Directors for the American Institute of Physics and is Chair of the Governing Council of the Nanoelectronics Research Initiative. To date, he has served on 102 industry/university/government boards and advisory committees. He has also authored/presented 251 publications and invited papers/talks and has 22 U.S. patents.