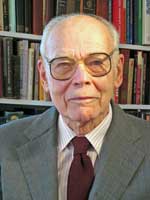 
Robert Meservey, received a BA degree magna cum laude from Dartmouth College in January 1943. In the army from 1943 to 1946, he served in the Tenth Mountain Division and at the Engineer Research and Development Laboratory (ERDL). From 1946 to 1951 he was a self-employed architectural photographer. Returning to ERDL as a civilian physicist from 1951 to 1955, he again did research on far infrared image systems. In 1961 he received a PhD from Yale University with a thesis concerning the thermal flow and rotation properties of superfluid helium. He joined the MIT research staff at the Lincoln Laboratory in 1961, moving to the National Magnet Laboratory in 1963. He remained at the Magnet Laboratory until 1994, when he retired and became a visiting scientist. His research with many collaborators, particularly Paul Tedrow, was mainly supported by the NSF and AFOSR and centered on tunneling studies of superconductors in magnetic fields. Measurements of the energy gap, penetration depth, flux quantization and the critical magnetic field of thin Al films led in 1970 to the discovery of spin-polarized electron tunneling, which was then applied to study the spin properties of superconductors, tunnel barriers, and ferromagnetic metals. In 1994 he helped analyze Mooderas successful tunneling experiment between ferromagnetic metals at room temperature. He supervised four PhD students and several Post Doctoral physicists. Meservey is a member Phi Beta Kappa and a Fellow of the American Physical Society.