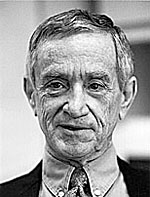 
"For 'telling it like it is' with his widely-read What's New and through other means on physics-related aspects of science and public policy issues."


Dr. Park began his academic career preparing for law school but after an interruption for the Korean War, he switched to physics at the University of Texas where he received his undergraduate degree in 1958. He received his Ph.D. in 1964 from Brown University where he studied surface physics. In 1965 he joined Sandia Laboratories and in 1969 became head of the Surface Physics Division. In 1974 he was appointed Professor of Physics and Director of the Center of Materials Research at the University of Maryland and in 1978 he became chair of the Physics and Astronomy Department at UMD.

In 1982, during a sabbatical, Dr. Park opened an Office of Public Affairs in Washington, DC at the request of the APS. He continues to divide his time as the Director of Public Information for the APS and his responsibilities at the University of Maryland. He is the author of the controversial What's New weekly electronic commentary on science policy issues, is a regular contributor of opinion articles in major newspapers, and a frequent guest on radio and television news programs.

Dr. Park is the founding editor of Applications of Surface Science and is a Fellow of the APS, the American Vacuum Society, and the American Association for the Advancement of Science. He has served on more committees and panels than he chooses to remember. He is currently writing a book with the tentative title Voodoo Science.