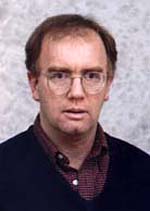 
"For theoretical and experimental work establishing the composite fermion model for the half-filled Landau level and other quantized Hall systems."

Dr. Willett's current research interests focus on the physics of reduced dimension phenomena, and particularly in the use of nanoscale structures to experimentally examine these effects. Within studies of quantum Hall systems he has employed multiple small-length-scale probes, most notably small wavelength surface acoustic waves, which even presently are being used to understand the 5/2 filling factor state. Another current area of interest is the problem of decoherence in metals, where his group's efforts have included examination of nanoscale wires to expose dephasing phenomena. Further current research topics include conduction mechanisms in and manipulation of single molecules, and developing photonic band gap structures.

Dr. Willett is a Fellow of the American Physical Society.