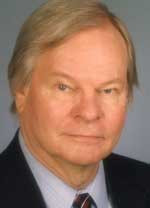 
"For his pioneering historical studies of the photon concept and nuclear physics, and for his leadership in bringing physicists into writing the history of physics by helping to organize and develop supporting institutions and publications."


Roger H. Stuewer is Professor Emeritus of the History of Science and Technology and of Physics at the University of Minnesota.  He received his B.S. in 1958 and his Ph.D. in 1968 in history of science and physics at the University of Wisconsin.  He has been visiting professor of the history of physics at the Universities of Munich, Vienna, Graz, and Amsterdam.  His books include The Compton Effect: Turning Point in Physics and Nuclear Physics in Retrospect.  He has served as Secretary of the History of Science Society, Chair of the AIP Advisory Committee on History of Physics, Chair of the APS Forum on the History of Physics, Chair of the AAAS Section on History and Philosophy of Science, President of the Minnesota Chapter of Sigma Xi, and Chair of the Advisory Board of the Seven Pines Symposium.  He co-founded and has co-edited the journal Physics in Perspective and edits the Resource Letters of the American Journal of Physics.  He has been a Sigma Xi Distinguished Lecturer and an APS Centennial Speaker.  He has received an AAPT Distinguished Service Citation and Minnesota's George Taylor Distinguished Service Award.  He is a Fellow of the AAAS and of the APS.