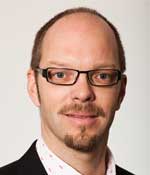 
"For seminal contributions to the development and application of quantum metrological methods, in particular of squeezed light sources and optical springs, enabling sensitive measurements beyond the standard quantum limit."


Roman Schnabel graduated in Physics in 1994 at Hannover University, Germany, where he also received his Ph.D in the fields of plasma physics and laser spectroscopy in 1999. He was a postdoctoral researcher at the Max Planck Institute for Quantum Optics until 2000, when he received a Feodor-Lynen fellowship of the Alexander von Humboldt Foundation to participate in a research project on quantum teleportation at the Australian National University. In 2002 he went back to Germany to become a researcher at the Max Planck Institute for Gravitational Physics. From 2003 to 2008 he was a Juniorprofessor and has been since then Professor at the Faculty of Mathematics and Physics of the Leibniz Universität Hannover. He is a Fellow of the German Physical Society. His research fields of interest are nonclassical states, quantum information and gravitational wave detection.