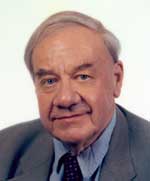 
"For fundamental contributions to the development of gravitational wave detectors based on optical interferometry, leading to the successful operation of the Laser Interferometer Gravitational Wave Observatory."

He has conceived and carried out original experiments in several fields, including an early high-precision experiment on anisotropy of inertial mass, using a unique earth's-field nuclear precession technique to set a sensitive limit to space anisotropy. He has also participated in measurements of the gravitational red-shift of photons (at Harvard University), and on atmospheric Cerenkov and fluorescence observations relating to supernovae.

Since 1972, his main research work has related to the detection of gravitational radiation. Initially he developed bar gravity-wave detectors, having unusually broad bandwidth, and used a pair of these to set early limits to gravity-wave fluxes.

Switching to development of laser interferometers for gravitational wave detection, he introduced several significant new concepts. Among these was a precise technique for laser frequency control now extensively used in many applications in science and technology.

In 1979, he was invited to the California Institute of Technology to initiate an experimental effort on gravitation. He developed an exceptionally sensitive interferometer. This, together with a number of other original ideas, were key steps to the realization of the LIGO Project for a gravity-wave observatory, now fully operational.

He is a Fellow of the American Academy of Arts and Sciences, of the American Physical Society, of the Royal Society of Edinburgh, and was earlier a Vice President of the Royal Astronomical Society. He had held many advisory positions to government funding agencies such as the National Science Foundation (U.S.A.) and the Astronomy Policy and Grants committee (U.K.).