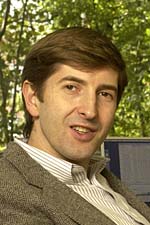 
"For broad investigation in precision measurements involving masers; in particular, for using hydrogen and noble-gas masers in achieving record sensitivities to violations of Lorentz and CPT symmetry in neutrons and protons, and for innovative applications of masers to imaging."


Ronald Walsworth received his B.S from Duke University in 1984, and his Ph.D. in physics from Harvard University in 1991. His doctoral research with Isaac Silvera focused on the development of a cryogenic hydrogen maser, as well as the use of room-temperature hydrogen masers to measure hydrogen spin-exchange effects and to test the linearity of quantum mechanics. Walsworth continued development of the cryogenic hydrogen maser as a postdoctoral researcher working with Robert Vessot at the Harvard-Smithsonian Center for Astrophysics (CfA).

In 1993, Walsworth moved into a Smithsonian Trust scientist position at the CfA and developed a research group that applies atomic physics and magnetic resonance techniques to a wide range of problems, including the development of novel atomic clocks; sensitive tests of physical laws and symmetries; stored light and applications to quantum information; studies of porous and granular media; and biomedical imaging with applications to pulmonary physiology.