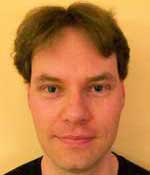 
"For seminal contributions to theoretical models of dark matter with new gauge interactions, and for leadership of the APEX experiment at the Jefferson Laboratory."


Rouven Essig is an Assistant Professor at the C.N. Yang Institute for Theoretical Physics at Stony Brook University. He earned his undergraduate degree in Physics (2001) and Mathematics (2002) from the University of the Witwatersrand in South Africa, and his PhD from Rutgers University in 2008. He was a postdoctoral research associate at the SLAC National Accelerator Laboratory from 2008-2011.

His research focuses on developing the theoretical implications of data collected at various particle physics experiments and on generating new ideas for experiments to search for new physics. He helped develop the theoretical foundation for a new generation of fixed-target experiments that search for MeV-to-GeV mass “dark photons”. He is the co-spokesperson for one such experiment, the A' Experiment (APEX), and a member of another, the Heavy Photon Search (HPS), both at Jefferson Lab. His recent research interests include the search for sub-GeV dark matter and the search for nonstandard decays of the 125 GeV Higgs boson. He is an Affiliated Scientist with the Fermi-LAT Collaboration.

He is a 2012 recipient of the Department of Energy’s Early Career Award and a 2013 Alfred P. Sloan Research Fellow. He is a member of the APS divisions of particles and fields and astrophysics.