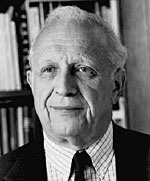 
"For important contributions to the mathematical physics of quantum optics and short-wavelength scattering."


Roy Glauber has been the Mallinckrodt Professor of Physics at Harvard University since 1976. He received his BS in 1946 and his Ph.D. in 1949 from Harvard University. He worked as a staff member on the Manhattan Project and did postdoctoral work for the Institute for Advanced Study at Princeton and at the Swiss Federal Polytechnic Institute in Zurich. He has served as a member of the editorial Board of several technical journals including Nuclear Physics B and the Journal of Mathematical Physics. He has been a visiting scientist and professor at CERN, the University of Leiden, NORDITA in Copenhagen and the College de France in Paris. Glauber has been a member of the Advisory Board for the Program for Science and Technology for International Security at M.I.T. since 1983. He has received numerous honors and prizes including the A. A. Michelson Medal from the Franklin Institute in Philadelphia (1985), the Max Born Award from the American Optical Society (1985) and the A. von Humboldt Research Award (1989).