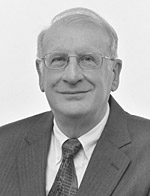 
"In recognition of his pioneering role in experimental studies of the structure of the deuteron and especially for his innovative use of polarization techniques in these experiments."


Dr. Roy Holt received his B.S. degree (1969) from Southern Methodist University and his M.Ph. (1971) and Ph.D. (1972) degrees from Yale University. He served on the research staff at Yale University until 1974, when he joined the staff of the Physics Division at Argonne National Laboratory. While at Argonne he conducted experiments on the deuteron at ANL, LAMPF, MIT-Bates, SLAC and the BINP at Novosibirsk. In 1994 he became a professor of physics at the University of Illinois at Urbana-Champaign, where he also served as a Director of the Nuclear Physics Laboratory and continued experiments at Jefferson Lab, DESY-Hamburg (HERMES experiment) and IUCF. He returned to Argonne National Laboratory in 2000, where he serves as chief of the Medium Energy Physics group in the Physics Division. His present research interests include the structure of the nucleon and nucleus as well as a search for a non-zero electric dipole moment in 225Ra.

Dr. Holt is a Fellow of the American Physical Society and of the Institute of Physics (London). He has served on program advisory committees for several accelerator facilities, NSAC subcommittees, panels for DOE and NSF, and editorial boards of Physical Review C, Nuclear Physics A and the Journal of Physics G.