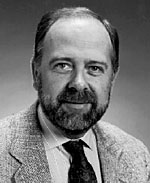 
"Gail Hanson and Roy Schwitters are honored for their separate contributions which together provided the first clear evidence that hadronic final states in e+ e- annihilation, which are largely composed of spin 0 and spin 1 particles, originate from the fragmentation of spin 1/2 quarks. Roy Schwitters used muon pair production to measure the polarization of the beams in the electron-positron storage ring SPEAR. He showed that the azimuthal distribution of high momentum hadrons in hadronic final states was the same as that observed for muon pairs, consistent with the origin of these hadrons from the fragmentation of spin 1/2 quarks."


Roy F. Schwitters is S.W. Richardson Foundation Regental Professor of Physics at the University of Texas at Austin, where he teaches and conducts research in experimental high energy physics. From its founding in 1989 until canceled by Congress in 1993, he was director of the Superconducting Super Collider (SSC) laboratory in Dallas, TX. Before moving to Texas, he was professor of physics at Harvard University.

Dr. Schwitters has been involved with research in high energy physics and related developments in particle detectors and accelerators for over twenty years. From 1980 until his appointment as SSC laboratory director, Dr. Schwitters was co-spokesman and head of construction for the Collider Detector at Fermilab (CDF) in Batavia, IL. From 1978 to 1989, he was Associate Editor of Annual Review of Nuclear and Particle Science: from 1980 to 1983, he was Divisional Associate Editor for Particles and Fields of Physical Review Letters.

Before joining the Harvard faculty in 1979, Dr. Schwitters was assistant and then associate professor at Stanford Linear Accelerator Center in Palo Alto, CA. He joined Stanford in 1971 as a research associate after receiving his Ph.D. degree in physics from MIT where he also earned his bachelor of science degree in physics in 1966.