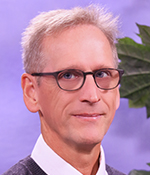 
"For extensive and significant contributions to the field of surface physics."


Ruud Tromp received an engineering degree in physics from Twente University in 1976, and a PhD in Physics and Mathematics from Utrecht University (cum laude) in 1982. The topic of Tromp’s PhD research was the atomic structure of silicon surfaces, as studied by Medium Energy Ion Scattering. In 1983 he joined the IBM T.J Watson Research Center in Yorktown Heights, NY, as a Research Staff Member. Over the years he has held various management positions, served as a consultant to the IBM Corporate Technology Team (an advisory body to the CEO), and he is a member of the IBM Academy of Technology. His research has focused on semiconductor surfaces, interfaces, and processes, including epitaxial thin film growth, silicide formation, phase transitions, quantum dot and nanowire formation, thermodynamics, etcetera. He has developed a number of advanced experimental techniques, including spectroscopic STM, Low Energy Electron Microscopy, In-situ Transmission Electron Microscopy, and others. Tromp has published about 260 refereed papers, several book chapters, and 22 United States Patents. In 2002 he was a visiting professor at the Institute for Materials Research at Tohoku University (Sendai, Japan) and in 2006 he accepted an appointment as professor at Leiden University in the field of Physics of Surfaces and Materials. In addition to these functions, he is the President of Beyaert Farm Inc., an equestrian sports enterprise in North Salem, NY. Tromp is the recipient of the Materials Research Society Medal, the American Vacuum Society Medard Welch Award, and the American Physical Society Davisson-Germer Prize.