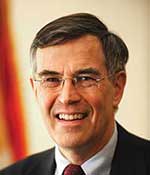 
"For outstanding contributions as Member of Congress and CEO of the AAAS in utilizing scientific evidence to inform our government and public on important national and international issues and working to implement policies and legislation that advance our national interest and strengthen the U.S. scientific enterprise."


Rush D. Holt, Ph.D., is the chief executive officer of the American Association for the Advancement of Science and executive publisher of the Science family of journals. Dr. Holt was previously the assistant director of the Princeton Plasma Physics Laboratory in New Jersey, and a 16-year member of the U.S. House of Representatives, representing New Jersey’s 12th Congressional District. Dr. Holt is a 1970 Phi Beta Kappa undergraduate of Carleton College (Northfield, Minn.), and holds M.A. and Ph.D. (1981) degrees in physics from New York University.