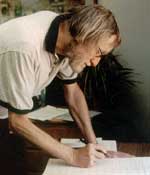 
"For the study of German science in the 19th and 20th centuries and a major biography of Henry Cavendish (with Christa Jungnickel, his late wife), and for founding the journal Historical Studies in the Physical Sciences."


Russell McCormmach received a bachelor degree in physics from Washington State College in 1955 and, as a Rhodes Scholar, a second bachelor degree in politics, philosophy, and economics from Oxford University in 1959. In 1967, he received a Ph.D. in history of science at Case Institute of Technology, where one of his principal teachers was the first recipient of the Abraham Pais Prize, Martin Klein. His first job after graduation was as with Bell Telephone Laboratories, as an electronics engineer. After acquiring his advanced degree, he became a professor of history of science, first at the University of Pennsylvania and then at Johns Hopkins University. For his work in history of science, he has received the Pfizer Prize from the History of Science Society and the John Frederick Lewis Award from the American Philosophical Society. He is a member of the International Academy of the History of Science. His latest work is a biography together with an edition of letters of the eighteenth-century English natural philosopher John Michell, in press.