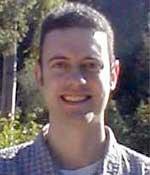 
Ryan Patterson received a bachelor of science degree with honors from the California Institute of Technology in 2000. He performed his doctoral research at Princeton University under the supervision of Prof. Peter Meyers, receiving his Ph.D. in 2007. This work was completed on the Booster Neutrino Experiment (MiniBooNE) at Fermilab, which looked to confirm or refute the unexplained neutrino oscillation signal hinted at by earlier results from the LSND experiment at Los Alamos. Dr. Patterson's dissertation presented an analysis of MiniBooNE's first complete neutrino data set. His analysis, which showed no evidence for LSND-like two-flavor oscillations, required the development of many calibration, simulation, and reconstruction techniques to achieve sufficient sensitivity to make a definitive statement. This non-observation of neutrino oscillations was cited by the American Institute of Physics as one of the top physics results of 2007. Dr. Patterson was also a co-recipient of the 2008 URA/Fermilab Outstanding Doctoral Thesis Award. Dr. Patterson is now a Tolman Postdoctoral Scholar at Caltech where he continues investigating the unknowns of the neutrino sector through two long-baseline neutrino experiments, MINOS and NOvA.