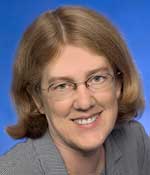 
Sally Dawson, Ph.D., received her undergraduate degree in mathematics and physics from Duke University (Durham, N.C.) in 1977, and her Ph.D. from Harvard University (Cambridge, Mass.) in 1981. Following postdoctoral fellowships at Fermilab in Batavia, Ill., and at the Lawrence Berkeley National Laboratory in Berkeley, California, she moved to the Brookhaven National Laboratory in Upton, New York in 1981. Dr. Dawson’s research focuses on theoretical studies of the Higgs boson and higher order calculations relevant to precision predictions of elementary particle scattering properties. She is particularly interested in determining if the observed Higgs boson has exactly the same properties as that theoretically predicted, and if there could be more than one Higgs boson. She is a fellow of the American Physical Society (APS) and the American Academy for the Advancement of Science, and received a Humboldt fellowship in 2015. Dr. Dawson has chaired both the Fermilab program advisory committee, and the Division of Particles and Fields of the APS.