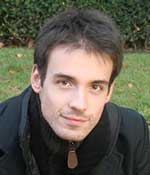 
"For creative and novel use of the hard xray free electron laser to isochorically create high density plasmas and accurately measure the ionization potential depression, and for new theory that addresses discrepancies with long standing models and provides stimulus for continued developments."


Sam M. Vinko received his degree from the University of Rome Tor Vergata in 2007, and his Ph.D. from the University of Oxford in 2011, investigating the interaction of intense XUV light with matter on the FLASH free-electron laser (FEL). As part of an international team he worked on producing record intensities in the XUV, and showed how these could be used to saturate atomic processes in metals on femtosecond timescales. For this work he was awarded the 2012 Culham Thesis prize from the Institute of Physics. As a postdoctoral researcher in Oxford he then worked on some of the first plasma experiments on the LCLS FEL, studying how intense X-rays could be used to create homogeneous hot-dense plasmas via X-ray isochoric heating. This work has most recently led to the first measurement of both continuum lowering and electron collisional ionization rates in dense plasmas. He has also been actively developing DFT-based models to efficiently simulate hot-dense plasmas from first principles. Sam Vinko was awarded a Royal Society University Research Fellowship in 2014 and now leads a small research group at the University of Oxford.