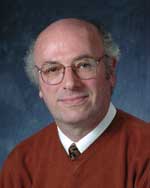 
"For spirited lectures, writing and experimental research in the area of nanomagnetism, magnetic films, multilayers and surfaces of metallic systems, including championing the surface magneto-optic Kerr effect approach."


Sam Bader received B.S. (1967) and Ph.D. (1974) degrees in Chemistry from the University of California, Berkeley. Presently he is an Argonne Distinguished Fellow. He also serves as Group Leader of the Magnetic Films Group, an Associate Director of Argonne's Materials Science Division, and Chief Scientist of the new Center for Nanoscale Materials. He is known for work in magnetic surfaces, films and superlattices, including ferromagnetic-superconducting multilayers. He has been active in the fields of giant and colossal magnetoresistance and exchange-coupled multilayers. He pioneered the surface magneto-optic Kerr effect (SMOKE) approach in surface magnetism. His interests include creating ultra-strong permanent magnets, known as spring magnets, and to explore laterally confined nanomagnets in order to develop magnetic electronics and bio-inspired templates for self-assembly. He is a Fellow of the APS and the AVS. He received the DOE-BES Award in Solid State Physics for work on coupled magnetic layers in 1992, the University of Chicago Award for Distinguished Performance at Argonne in 1994, and the AVS Thornton Award for surface and thin film magnetism" in 2001. He is an Associate Editor of Applied Physics Letters and Editor-in-Chief of the Journal of Magnetism and Magnetic Materials.